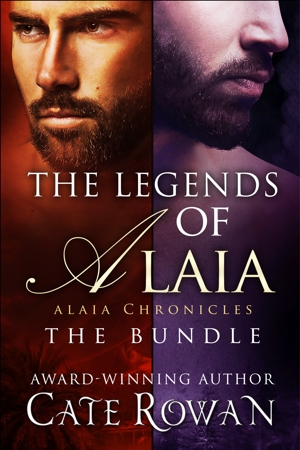 The Legends of Alaia Bundle

Immerse yourself in two legendary tales of the immortal twin founders of verdant Teganne and desert Kad — rivals divided by magic, yet bound by blood, mistrust, and love.

The lives of well-born twins Kismet and Taso are easy and carefree — endless days of bedding women and fighting battles among the gods — until sorcery drives a wedge between them that slices deeper than flesh. Kismet has striven to be the ultimate warrior, but a mistake costs him his brother, his family, and his homeland.

He carves out a new life in the desert, rising to the command of a realm and an army, yet can’t escape his past. When two women beg for his aid against tyranny, he must sacrifice his freedom and his long-scarred heart to help them.

Slashed by a cursed sword, the god Taso feels his immortality gushing into the grass. In desperation, he transforms into stone to escape death.

Centuries later, the very mortal musician Amara stumbles across the stone and inadvertently morphs Taso back into his dying body. To save him, she must sacrifice her precious lute and her life-long dream… but in return, she and Taso might find their hearts’ desire.

Get this bundle now!

From the first page I was instantly transported into a well-developed fantasy world and couldn’t put my Kindle down until I had finished the last page. A fast-paced story with heartfelt emotion!”
Click here to read an excerpt

EXCERPT FROM THE LEGENDS OF ALAIA

“Amara,” he spoke again, stopping her as easily as if he’d bespelled her. “Thank you. For your help. For your kindness to a stranger.”

She looked at him at last, and shivered. “Did I truly break a spell?”

“I’m Taso.” He smiled, teasing her as firelight danced across his face.

His chest rose with a long breath and he rolled his gaze up to the star-dusted sky. “I’m not sure.”

“How could that be?”

He glanced at his wound and grimaced. “This happened.”

“I don’t understand.” When he stayed silent, she crossed her arms and narrowed her gaze. “Speak up. You see this jackamunk on the fire? It won’t taste as nice uncooked, especially if you have to drag yourself over to it.”

His eyes gleamed. “It might, since I’m hungry enough to eat it raw.”

She raised her chin. “Then tell me because you owe me.”

After a moment, he nodded. “That I do. Are you sure that’s how you’d like me to repay you?” His voice had gone as rich and deep as mead.

She snatched up her backsack and lute. “I don’t need your bed favors, stranger.” Her mother’s tendencies be damned.

“I’m sorry,” he said, his good hand raised in plea. “I didn’t mean to offend you.” He lowered his head back to the ground. “You can’t blame a man for trying. Even if I am only three-limbed at the moment, and hardly a match for you.”

The compliment threw her into quiet confusion. He didn’t think he was a match for her? When he looked like that? She continued to clutch her belongings. “Tell me who you are.”

“Taso, brother of Kismet,” he sighed. “Son of a goddess and a god. I was a warrior and a mage . . . somewhat better at the latter, as my twin, damn the truth of it, pointed out when last I saw him. And finally, though maybe not least, I’m in debt to a maiden named Amara. Who need not fear me,” he added gently. “Though perhaps she could fear for me. Or for my immortal soul, which may not even be mine much longer.”

She slanted a look at him, but he broke into a grin. “Amara, you’re so serious—when I’m the one lying here with his arm half cut off.”

Her mouth twitched into a half-smile. “It’s sewn back together.”

“Indeed it is, and carefully and kindly done. On my honor, this stranger thanks you.”

She lowered her lute and backsack to the ground and then took a step closer.

Kismet is a magnificent hero who hides his wounds behind his power. As usual, Cate Rowan delivers a beautiful tale." 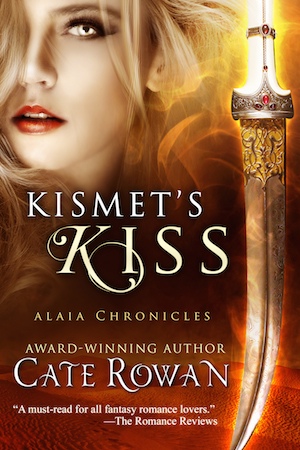 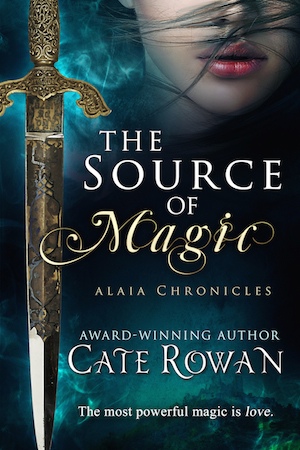